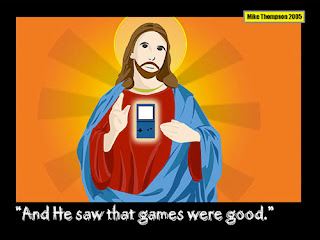 Virtuality immerses people in visual and sometimes tactile alternative worlds in which they can explore (within a range decided by the program creator and the limits of technology) roles for enacting forms of god-shaped freedom within religiously construed virtual environments. For more conversation about the video games that so construe reality, the reader may want to check out this fascinating website, Gamechurch.com.
Posted by John McClure at 1:39 PM